RAMS FC is Looking for Players

There are opportunities to train with RAMS FC on campus for the month of May in the following age groups. These are our current teams and you would attend a live practice with our great coaching staff on campus to get a sense of what life is like at the RAMS. It’s a great way for you to look at the club while we look at you in a low pressure environment.

Please note if you’re a talented player and feel you could play up an age group you are more than welcome to attend a practice. For example a 2009 girl could practice with the 2008’s and be considered for the team next season.

RAMS FC Is a Premier level youth soccer club for boys and girls based out of the University of Rhode Island.

We are a boutique outfit that pride ourselves on quality over quantity. Our facility is the best in the state and we welcome you to come try it for yourself.

Our staff are engaging well licensed and committed to player development both on and off the field. With great facilities and great staff we have a winning combination that is hard to beat in Southern RI.

Click on the image below to view the RAMS FC Developmental Pyramid. 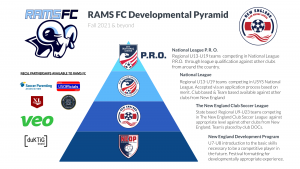